My second exhibition was a real emergence in terms of defining a specific aesthetic. It was an exhibition of large abstract paintings inspired by my readings in the history of the New York School, and how that generation continues to create a consensus for the motivation of young painters everywhere.
Having been raised on Conceptualism, I knew that it might be considered a step backward in terms of the formal language and approach to the notion of abstraction, but here I was touching the very artistic passion for abstraction within my own generation, and it was compelling to say the least.


This exhibition took shape over the course of eight months. I am not sure whose work specifically began the conception out of which it sprang, at least three or four artists contributed to my developing aesthetic. I cannot list them in any specific order. I would rather talk about how the art historical perspective I had aided me in recognizing the inherent value of work by contemporary abstract artists. I have since that time organized at least five other exhibitions about painterly abstraction and the cultural imprint it maintains.
As far as my recollection stands, I can say that I met or heard about the majority of these painters from one another, and met them at various gallery receptions including those at Pierogi 2000, where I had visited upon the gallery's inaugural exhibition, which was for Robert Smithson, a Conceptual artist considered highly by my father and others of our shared milieu in the gallery world. Despite the Conceptual leanings of this specific exhibition, the gallery by and large represented the creative talents of the local Williamsburg community, which was heavily expressive of painterly and otherwise pictorial elements. The gallery's openings were special. Located only two blocks from the Bedford Avenue subway stop, they served Polish Vodka and Pierogis to visitors.

Karen Arm was one of those I met here. When I visited her Tribeca studio, I was confronted by a series of large abstract paintings that alternated between scenes of the galaxy and depictions of smoke rising and intertwining. An exploration into the expression of mystery had led her to depict the breadth and structure of the cosmos and alternately the most effervescent of elemental exchanges. 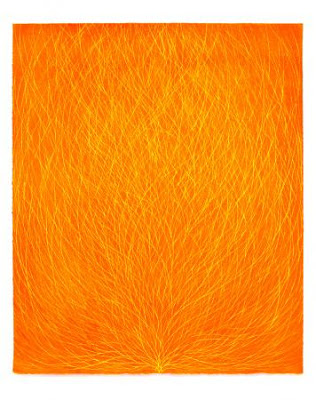 Posted by David Gibson at Tuesday, February 19, 2013 No comments:

The story starts in 2000, when I curated my first exhibition in the studio of L. Brandon Krall. My curatorial intentions at that time were very naive; I knew only that I finally wanted to organize an exhibition, perhaps the first of many, and that it had to take some specific form. I was not well versed enough in the practice of curating to understand how themes could drive a random assortment of expressions into a singular experience.

The artists I had gathered all had one thing in common: they were female. I didn't care about quotas, I just wanted the best artists I could come up with at the time; and I wanted something more, an amassing of expressions that went beyond the most utilitarian version. I wanted a few things that didn't quite fit, and that in their ambiguity and their mere excessiveness, would push the exhibition's appeal over the top.

I developed a theme for the exhibition that engaged with a variety of female expressiveness but that also evaded the forcible politics of Feminism. I decided to title it 'SUGAR+SPICE' because I wanted to speak to the tangent between the personal and the universal. I wanted to address a regard for identity that is prefigured in our childhood as associated with the nursery rhyme that states “Sugar and spice, and everything nice, that’s what little girls are made of.”


Fire In My Belly (1999) by Amy Chaiklin was perhaps the most forceful image. It showed a woman sitting atop a ladder, suspended in the air by her sexual organ. She has six hands and therefore infers a Hindu goddess, also affiliated with Tantric Yoga, who may be either Shiva or Kali. In Buddhism the belly is supposed to be the residence of the soul, though this may also refer to earthly or spiritual hunger, or the presence of a forthcoming child; the offspring of a deity being the potential manifestation of an elemental force. Whether childbirth or inspiration, hunger or anger, Chaiklin’s depiction of a deity inspired female figure ads a dimension of soulful irreverence.

The Crescent Series (1999) by Carla Gannis was a trio of digital images in which a scene of casual camaraderie served as the background image within a silhouette of a sexual act. Friendship and passion are the two poles of personal identity, one equated with the mores of a communal social contract, the other simultaneously feeding the need for emotional intimacy (communcation, reciprocation, and tenderness) as well as for libidinal intensity. These two drives feed mutually opposed yet equally important needs that are active aspects of character development.


SUGAR+SPICE engaged with the polarities of culturally defined identity, especially perceived roles versus personally assigned ones, and how they merged into one ambiguous system of reference. For it's not really one or the other; it's not really about choices, as I originally thought. It's about learning through stages in one's identity. Whatever we decide we relate to may at one time seem important, and then it will shift as we grow older; it will not become its opposite but a dialectic leading somewhere else entirely.

This exhibition was all about beginnings. Its basic question was: "Where do we go from here?"

BETWEEN THE LINES: AMANDA CHURCH AT MICHAEL STEINBERG FINE ART 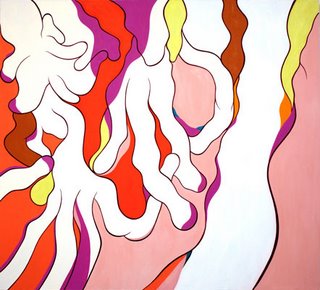 The purpose of imagination is to see. Amanda Church understands that it takes very little to allow us to depart from the real into the imagined, and she provides these elements in her paintings as an entry into the mystery that separates the sensory from what is useful in everyday life. The type of experience they engender can be found easily in nature, like looking for the constellations in the night sky, or divining meaning from tea leaves. Three elements are actively at work in these images: lines, color, and perspective, and each complicates the other two. Looking at “Flash Point” (2006) for instance, we may at first see only areas of color and forms that suggest hands, feet, and the profile of a human face. The shapes inferring human form are not depicted straightforwardly, but as if a picture was taken from so close to its subject that all the details became blurred. Also, Church cuts across the “objective” of the painting with a scrim of other lines that disjoint it, as if the camera lens itself were blurred or cracked. Then she also adds alien colors to the mixture, which create visual areas that war with one another, tempting us to look closer while always obfuscating the process that leads to visual clarity. In a different painting, “Tangled Web” (2006), we are presented with a visceral mess of veins and tendons, the interior workings of the human body that are palpably human though in themselves esthetically ambiguous. It is far more difficult to perceive intimations of physical reality in abstract forms when they emerge from the popular imagination out of issues of Nature magazine. Yet the tension of these lines and bodies, when combined with a playful and tentative use of color, overwhelm the interior vertigo we may encounter. It is perhaps easier to see human elements in nature but more fulfilling to realize the human in an effort to create beauty from the most oblique perspectives painting can offer. 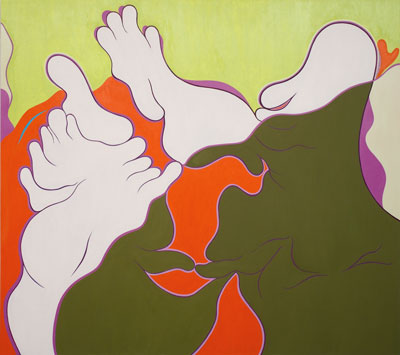